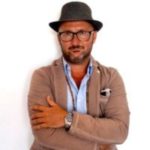 Aldo Chiappini was born in 1975 in the foothills of the Alpi Apuane, in Carrara, an area between Tuscany and Liguria, and between the land and the sea. The adventure that led him to become part of the Zio team was triggered, as for all the important choices he has made, by music. His love for music, in fact, started when he learned to play the guitar at 13 years old and this instrument, from time to time, has accompanied him for many years to come. At 16 years old he started to become interested in sound and soon after he became the sound technician of the band he also played in. From then on things really started to move and his workload increased thanks to the constant collaboration he had with services of central Italy. The following years were intense and full of live activities and music, with important experience connected to shows and concerts around Italy, as well as in Europe, especially in France. When he was 24, his job as a sound technician was becoming so complicated and well-paid that he was obliged to make a decision and he reluctantly left his beloved studies at the Faculty of Natural Science in Pisa just before graduating. “And maybe one day I'll get my degree, who knows …”. As a sound technician, he combined live work with that in recording studios but it is post-production that is more suitable for his professional growth. The breakthrough in his career took place when he started a profitable and intense collaboration as musical consultant and studio technician for a newly founded cross media agency which, in just a few years, became one of the most important of its sector in Italy. During the three years of work at this company, he produced tens of audiovisual and corporate videos for numerous Italian and international companies. And it is at this step that Aldo started to be attracted by all types of communication, and in particular in audio-visual, teaching himself as well as taking part in conferences and meetings, since at that time there was still no official channel dedicated to this type of profession. By pure chance he started to work as a journalist with his present partners and friends who offered him the possibility of working for this great adventure called ZioGiorgio, just a name for many, but for Aldo a dream. He was hired for his first job in 2004, as a “newser”, searching for and informing the editorial department about news items… Thanks to ZioGiorgio, he has been to hundreds of concerts, visited factories and companies in Europe and around the world, he takes part in numerous seminars and conventions, going to the most important fairs of the sector, with the possibility of meeting and interviewing some of the finest minds of the sector. Today, at NRG30 srl, the company that groups together the different 'magazines' and where he became a partner in 2010, he is the editor-in-chief, even if he likes to consider himself as a 'simple supervisor of the – excellent – work carried out by the collaborators of ZioGirogio around the world”. Thanks to a recent article about an important international artist in Miami, two Italian newspapers decided to interview and ask Aldo about his profession, to the greatest joy of aunts, mothers and grandmothers, who at long last now understand the complicated and profound job that he does…